Optoelectronic components have been incorporated into fibers and woven into fabrics, which can be also washed

911 Electronic > News > Optoelectronic components have been incorporated into fibers and woven into fabrics, which can be also washed 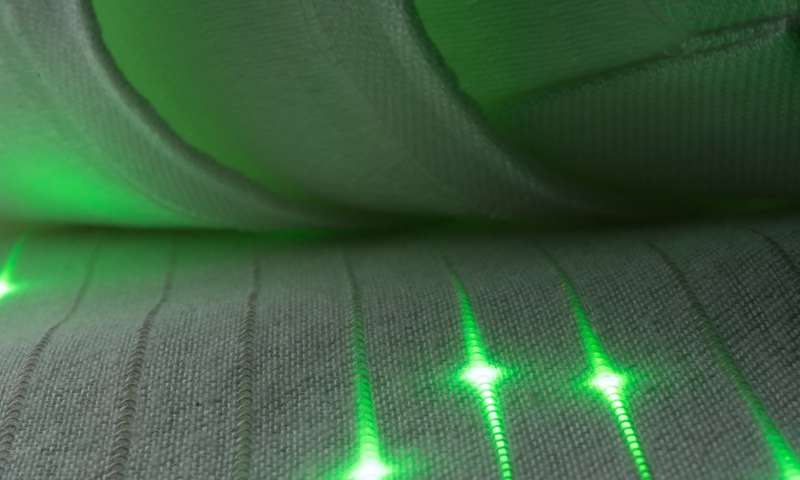 Optoelectronic components have been incorporated into fibers and woven into fabrics, which can be also washed

Researchers from MIT (Massachusetts Institute of Technology) have incorporated hi-speed optoelectronic semiconductor components (including LEDs and photodiodes), within fibers. After that, they were woven into soft, washable fabrics and made into communication systems. This is the next important step in development process of the smart and modern ”electronic clothes”. Researchers say that this discovery has the potential of releasing a new “Moore’s Law” for fibers, which is a rapid progression in which the capabilities of fibers would grow rapidly and exponentially over time, just like in the semiconductor integrated circuits area.

The traditional way of obtaining optical fibers was making of a cylindrical object called a “preform,” which is a scaled-up model of the fiber and then heating it. Softened material is then drawn or pulled downward under tension and the resulting fiber is collected on a spool. The key breakthrough for producing these new fibers was to add the light-emitting diodes (of a grain of sand size) to the preform, and a pair of a hair’s width copper wires. When heated in a furnace during the fiber-drawing process, the polymer preform has partially liquified, forming a long fiber with the diodes lined up along its center and connected by aforementioned copper wires.

In this case, the solid components were two types of semiconductor diodes: light-emitting diodes (LEDs) and photodiodes. Both the devices and the wires will maintain their dimensions while everything shrinks around them. The resulting fibers were then woven into fabrics and laundered 10 times to demonstrate their possible practical use as a material for clothing.

One of the advantages of incorporating function into the fiber material itself is that the resulting fiber is inherently waterproof. To test this, the team of scientists has placed some of the photodetecting fibers inside a fish tank. A lamp outside the aquarium transmitted music through the water to the fibers in the form of rapid optical signals. The fibers in the tank converted the high frequent light pulses into electrical signals, which were then converted into acoustic spectrum – music. Water didn’t do any harm to fibers – they were submerged in it for weeks. Though the principle sounds simple, making it work consistently, and making sure that the fibers could be manufactured reliably and in quantity, has been a long and difficult process. Staff at the AFFOA Institute developed the pathways to increasing yield, throughput, and overall reliability, making these fibers ready for transitioning to industry. At the same time, Inman Mills developed techniques for weaving these fibers into fabrics using a conventional industrial manufacturing-scale loom.

Scientists say that the first commercial products incorporating this technology will be reaching the marketplace as early as next year, so very soon. These initial applications will be specialized products involving communications and safety. Researchers say, that beyond communications, the fibers could potentially have significant applications in the biomedical field. Devices using such fibers could be used to make a wristband that could measure pulse or blood oxygen levels, or be woven into a bandage to continuously monitor the healing process.