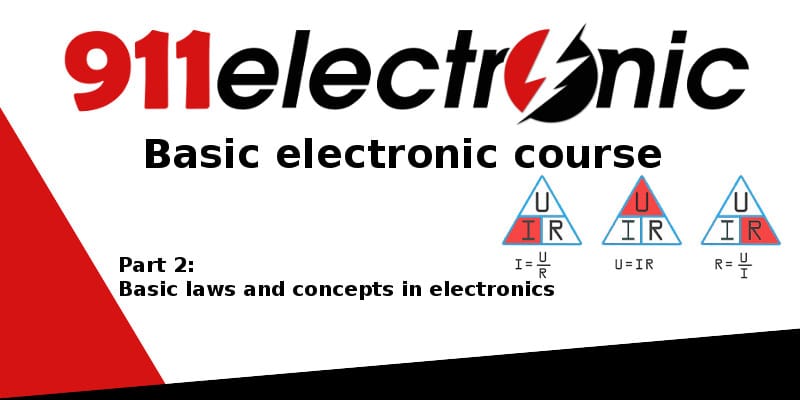 Welcome to the second part of our “Basic Laws and Concepts in Electronics” Course. In case you have missed our first part of the course, here you can check it out.

Electric Charge – What is it?

There are two different types of electric charges: positive and negative. Particles that carry the same type of charge repel each other, but the opposite ones are attracted to each other. The same phenomenon can be observed in magnets. The unit of electric charge is called Coulomb [C]. Theoretically, every material object is able to adopt a certain electric charge, becoming positively or negatively charged.

Electric Current – What is it?

Transmission of electricity from the source to the receiver takes place via an electric current, in the presence of metal conductors or conductive paths that connect individual components of the circuit. The flow of electric current depends on the movement of electric charges, usually electrons, through the components of the electronic circuit. This movement is possible due to the electric field created in the wires by electric voltage or current sources. In other words, electric current is the orderly movement of many electric charges in the same direction through the conductor. However, there must be external electric voltage applied to that conductor to “push” these charges in desired direction. Current intensity is expressed in Amperes [A], which means the rate of charge flow from point to point and is indicated by the letter “I”. This means, that the current “I” informs us how much charge flows through the cross-section (certain thickness) of the conductor in one second. There are two types of the electric current: direct current and alternating current.

It is characterized by the same arrow and direction of flow of electric charge in the circuit (flows always from the power source to the receiver).

The instantaneous current values changes in a repetitive, periodic (amplitude V0) way with a specified frequency “f”. It can be transmitted, e.g. by a sine wave, rectangular wave etc. (more in our article about signals). However, it is required for this function to be periodically variable. This current flows bi-directionally (unlike DC current):

Comparison between direct current and alternating current can be seen on the Fig. 1. below.

Electric Voltage – What is it?

The current flow in the receiver takes place as a result of the electric field, so the potential difference appears on the receiver’s terminals. Electric voltage is defined by the difference of the electric potentials between two points of the circuit, measured in Volts [V] with “V” or “U” symbol. Simply put: it is the force with which the carriers of the electric charge “want to get closer to each other”, so the higher the tension (electric voltage), the greater the force. It is important to distinguish between the voltage at the electromotive force (EMF – battery, power supply) terminals and the voltage drops across components in electric circuits.

Electric Power – What is it?

Defined as the amount of work done, collected or given per unit of time. It is expressed in Watts [W] with “P” symbol. It can be calculated mathematically as the product of voltage and current:

If the direction of current is the same as the direction of the voltage supplied by the voltage source, then power is positive and the source is “doing the work”. In  opposite scenario, the power will be negative and the source will „absorb the work” (accumulate energy). Electronic devices lose power in quantities that depend on their systems and their applications. This phenomenon may be smart used e.g. in heaters, but is deadly to amplifiers or integrated circuits – systems, that require additional cooling to prevent overheating.

Resistance – What is it?

It is a measurement of how difficult it is to flow electric current “through” e.g. a particular electronic component or system, what is the result of its physical properties. It has its own symbol “R” and its unit is called Ohm [Ω]. The conductance “G” in Siemens unit [S] is the “inverted” resistance:

Ohm’s Law (for Direct Current) – the proportionality of the current „I” in the component of the circuit and the voltage „V” between its terminals is given by: 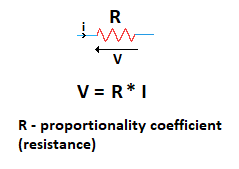 After a simple mathematical transformation, we will obtain two more equations:

Illustration from the Fig. 2. has really helped me in learning Ohm’s Law during my electronic studies, I hope that it will be helpful for you too!

The solution of the electronic circuit’s task consists of determining the current and voltage distribution on individual circuit components at given receiver parameters as well as source voltages and currents. The sum of the currents „flowing in” to a given node of a circuit equals the sum of currents „flowing out” of it. This is illustrated by the following example: