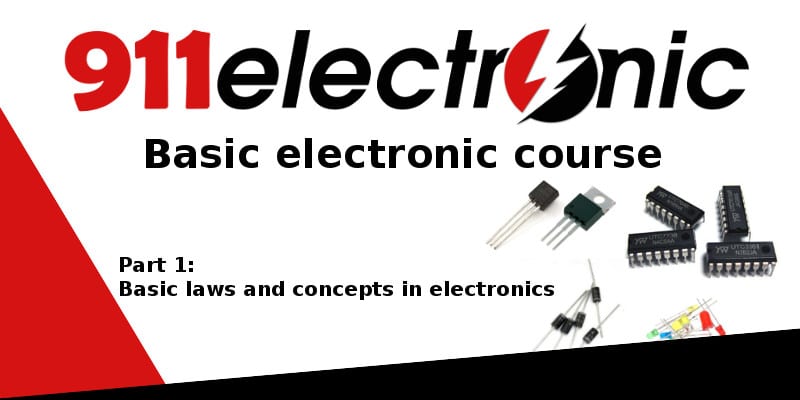 Welcome to our course about Basic Laws and Concepts in Electronics!

World of electronics is a very interesting place, but in order to move around there “with your head up” it is necessary to understand the phenomena taking place there. To do this, you have to acquaint and learn fundamental laws and concepts related to it, such as the meaning of Current, Voltage, Power, Resistance, Ohm’s Law and Kirchhoff’s Laws. We will try to do our best while explaining (in our opinion) the most important topics step-by-step, such as:

In the second part of this article, we will be mentioning topics such as:

Electronic Components – What are they?

They are the electric components that have the ability to generate electric energy (at the expense of other types of energy), storage energy and dissipate it. These components can be divided into two families: Active components and Passive components.

This group contains components that can generate energy in the electronic circuit or change their parameters, but they also require being supplied by the external power sources. We are talking about components such as diodes, transistors, or electronic chips (integrated circuits ICs).

This type of RLC electronic components doesn’t generate energy on their own, but can store it or dissipate it (e.g. resistors, capacitors, inductors).

Electric Circuit – What is it?

The electric current in the electronic circuit always chooses the path of the least resistance and will flow through the wire or path always from the “positive” to the “negative” terminal (in case of the positive voltage supplied to that circuit). Remember, that electrons flow in the opposite direction. Circuits can be suited either for Direct Current (DC) operation or Alternating Current (AC) operation, which is determined by the time dependency of the current from the time I(t). We also distinguish two ways of connecting electronic components together in the circuit – series and parallel connections.

In series circuits, one terminal of the first component is connected to the second component’s terminal(Resistor is connected with the diode “in one line” and is “one the same wire” as the the power source, like in the Fig. 3.). The current in the ideal circuit will have the same value in every point of the circuit and the voltage across the ideal circuit equals the sum of the voltage drops across all of the electronic components that have built this circuit (in this case, resistor and LED, as shown below).

In parallel circuits, the current flows through two or more circuit branches, and then it meets again (sums into one current stream) at the node. This phenomenon is described by the 1st Kirchhoff’s Law. In the Fig. 4. below, the capacitor “C” is connected in parallel with the resistor “R” and the LED “D” from the point of view of the power source V1.

Linearity of the Electric Circuits

One thought on “Basic Laws and Concepts in Electronics – Part 1”