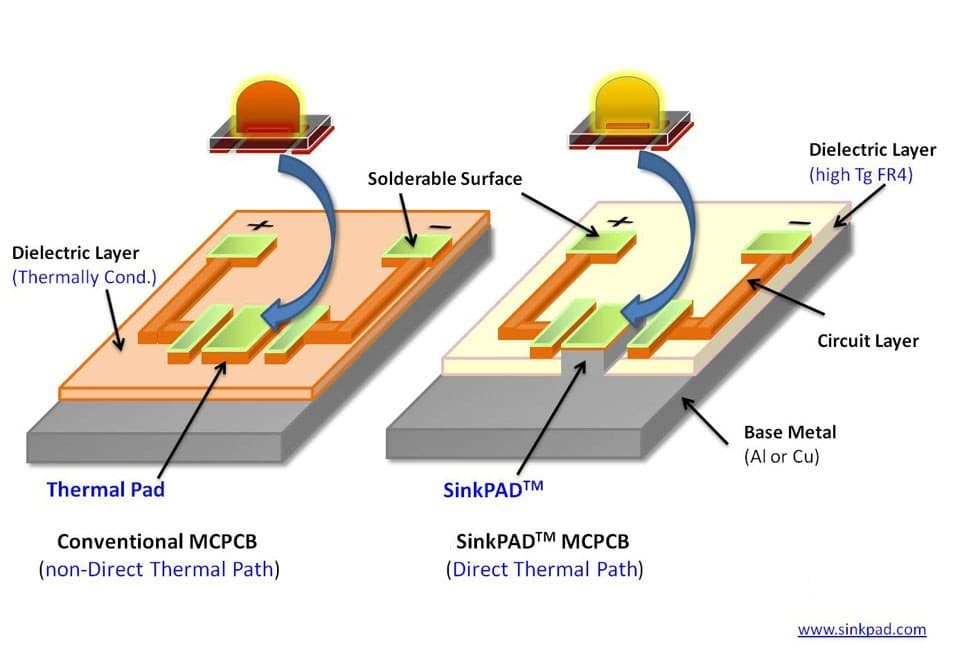 Light Emitting Diodes (LEDs) are highly efficient at producing optical radiation (light) directly from electrical current passing through them. However, as with other electrical devices, LEDs also convert a small part of the input electrical power as heat. Unless this thermal loss is dissipated, it is impossible to ensure reliable and stable LED operation and exploit the complete performance and efficiency of the LEDs. Designers have solved the problem of dissipating heat from LEDs by using metal core PCBs.

FR4 is the most commonly used PCB materials, and a flame-retardant epoxy laminate characterizes it. However, this method of construction gives the FR4 very low thermal conductivity.

If you were to calculate the through-plane thermal resistance for a 1.6 mm thick FR4 board of approximately 270 mm2 area, using standard values, you are likely to arrive at approximately 30 °C/W. Considering a smaller size for the heat source, closer to that of an LED say 3.3 x 3.3 mm, you will find the one-dimensional thermal resistance will increase to over 700 °C/W, making it almost impossible to keep the LED junction temperature within operational limits.

One of the inexpensive ways designers improve the thermal resistance of FR4 PCBs is by adding thermal vias. They place plated through holes (PTH) connecting the two conductive layers.

The fabricator laminates and bonds the three layers together, thereby providing a path for the heat to travel through and dissipate. Although designers commonly use Aluminum as the metal substrate, you may come across steel and copper substrates as well.

With metal core PCB design, you can have higher power density, better electromagnetic shielding, and improved capacitive coupling. Although designers do not need to use thermal vias for metal core PCB prototypes, designers sometimes use them to improve on the thermal performance.

As copper has better thermal characteristics than aluminum does, engineers prefer copper metal core PCB LEDs where they have to house high wattage LEDs in small enclosures. Metal core Printed circuit boards manufacturers selectively remove dielectric material to expose the base metal for attaching the LED chip. The direct thermal path improves performance by reducing the thermal resistance even more.

Metal core Printed circuit boards manufacturers use MCPCB for thermoelectric separation applications. They place the microchip or die in direct contact with the metal core, which helps in heat dissipation. They electrically interconnect the traces of the circuit board with wire bonding. This allows them to achieve thermal conductivity of over 200 W/mk for the COB MCPCB.

Metal core PCBs greatly reduce board space while replacing other components such as heat sinks. Mounting of other components such as power transistors becomes easier, as the presence of the metal substrate allows elimination of grease, mica, and rubber insulators under the power devices by mounting them directly on the metal substrate. Elimination of the insulating hardware improves heat transfer.

Designers can eliminate whole sections of printed wiring boards’, thereby eliminating interconnects, by using etched traces on the metal core PCBs. They can also replace many discrete devices at the board level by using power and passive devices of the surface mount type.

Apart from use in LED lights, you can find metal core PCBs being used in several other applications. For instance, the size constraints and watt-density requirements of DC-DC converters force engineers use metal core PCBs, as they are available in a variety of thermal performances, are compatible with mechanical fasteners, and are highly reliable. It is possible to use the metal core PCBs in various form factors and manufacturers can fabricate substrate metals in a wide variety, and with different thicknesses and copper foil weights.