Flexible supercapacitor printed on PET substrate has been developed. 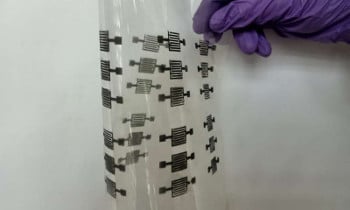 Flexible supercapacitor printed on PET substrate has been developed.

Supercapacitors are electronic components that are related to electrolytic capacitors family. Compared to their ”smaller brothers” they have much bigger electrical capacity thanks to specific construction. One of their biggest advantages is very short charging/discharging times compared to other devices for accumulating electrical energy such as electric cars accumulators, laptop batteries etc. They are also very efficient and less toxic compared to Li-Ion batteries. On the other hand, they are usually much bigger and store limited amounts of energy compared to smaller batteries. Unlike their smaller counterparts – batteries, operating principle of supercapacitors is based on storing electric charges instead of chemical reactions. Supercapacitor consists of two electrodes dipped in the electrolyte and separated by a thin insulator. When these electrodes are charged, an electric field is being created between them, which allows energy to be stored. The larger the surface area of the electrodes, the greater charge value can be stored.

To try to make them both light and efficient, researchers at the Indian Institute of Science have developed a supercapacitor printed on a flexible plastic sheet.

This supercapacitor was produced by using a spray-coating technique to deposit alternating layers of hybrid nanocomposites on top of a stainless steel mask, on a flexible plastic substrate from Polyethylene Terephthalate (also known as PET). It is widely used in the food industry for making plastic bottles for all kinds of beverages. Researchers from Indian Institute of Science have used a layer-by-layer method that has increased the surface area and made the movement of electric charges more efficient thus making their supercapacitors probably even more efficient than existing ones. Bending the sheet also didn’t affect its performance, making it useful for future flexible electronics applications.

Supercapacitors are getting much more popular and are useful in applications such as camera flashlight, brakes in cars, trains or elevators.