Excitons pave the way to better performance of electronic devices 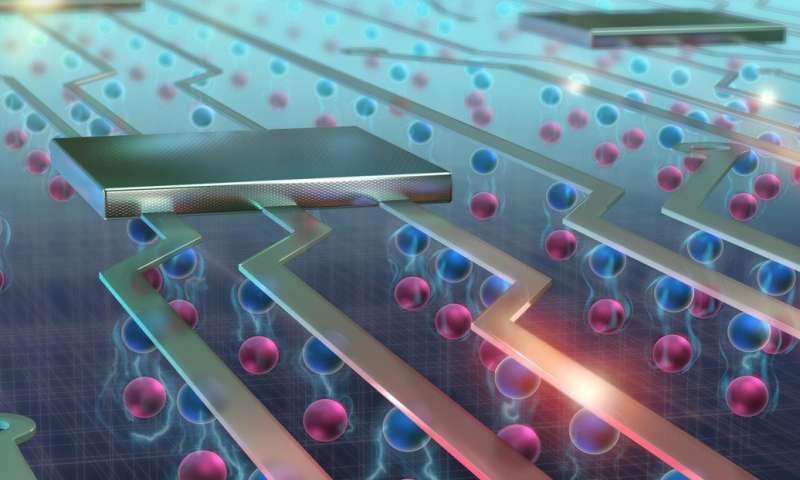 Excitons pave the way to better performance of electronic devices

After developing a method to control exciton flows at room temperature, EPFL scientists have discovered new properties of these quasiparticles, that can lead to more energy-efficient electronic devices. They were the first to control exciton flows at room temperature.
And now, the team of scientists from EPFL’s Laboratory of Nanoscale Electronics and Structures (LANES) has taken their technology one step further. They have found a way to control some of the properties of excitons and change the polarization of the light they generate. This can lead to a new generation of electronic devices with transistors that undergo less energy loss and heat dissipation. The scientists’ discovery forms part of a new field of research called valleytronics and has just been published in ”Nature Photonics”.

Excitons exist only in semiconducting and insulating materials. Their extraordinary properties can be easiliy accessed in 2D materials, which are materials whose basic structure is just a few atoms thick. The most common examples of such materials are carbon and molybdenite.

When such 2D materials are combined, they often exhibit quantum properties that neither material possesses on its own. The EPFL scientists thus combined tungsten diselenide with molybdenum diselenide to reveal new properties with an array of possible high-tech applications. By using a laser to generate light beams with circular polarization and slightly shifting the positions of the two 2D materials, so as to create a moiré pattern, they were able to use excitons to change and regulate the polarization, wavelength and intensity of light.

From one valley to the next

The scientists achieved this by manipulating one of the excitons’ properties: their “valley”, which is related to the extremes of energies of the electron and the hole. These valleys (which are where the name valleytronics comes from) can be leveraged to code and process information at a nanoscopic level.

“Linking several devices that incorporate this technology would give us a new way to process data.”, says Andras Kis, who heads LANES. “By changing the polarization of light in a given device, we can then select a specific valley in a second device that’s connected to it. That’s similar to switching from 0 to 1 or 1 to 0, which is the fundamental binary logic used in computing.”