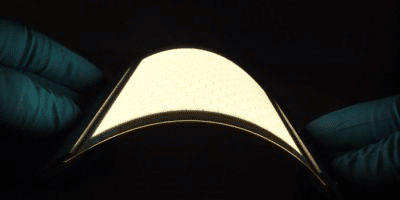 For the first time in history it has become possible to produce OLED graphene electrodes. This happened thanks to a team of scientists from the Fraunhofer Institute (FEP) in Dresden and its partners. OLED lighting technology is used in e.g. TVs and touch displays. The great potential of graphene is capable of replacing silicon in the future electronic components. The surface of the electrode has an area of 2 x 1 square centimeters. Development and optimization of the process was a part of the heroic-called project “Gladiator” together with industrial partners and scientific researchers.

Graphene is an extraordinary, modern material. It’s characterized by a planar structure having a thickness of only 0.3 nanometers, composed of carbon atoms combined in hexagons. Its shape can be compared to the honeycomb, and as it has a mononuclear thickness for the simplification is referred as a two-dimensional structure. The impressive properties of carbon compounds in the graphene (mainly electrical and mechanical) are of particular interest to the industry. Graphene has many applications from touch screens to sensors in environmental protection.

The electrodes for the transparent OLED technology are manufactured in a vacuum environment. Copper plate with high-purity of the material is warmed to a temperature of about 800 ° C. in the special steel chamber. The next step is adding a mixture of methane and hydrogen to cause a chemical reaction. Methane is dissolved in a copper thereby forming the carbon atoms on the surface. This process doesn’t last long – just a few minutes. After cooling it down, the resulting material – graphene is applied to it a special polymer, and the copper plate is etched away.

The “Gladiator” project was launched in 2013. The research team Fraunhofer is still working on minimizing impurities and defects accuring during he transfer of graphene thin plates on the other carrier materials. The date of completion of this project is considered to April 2017.